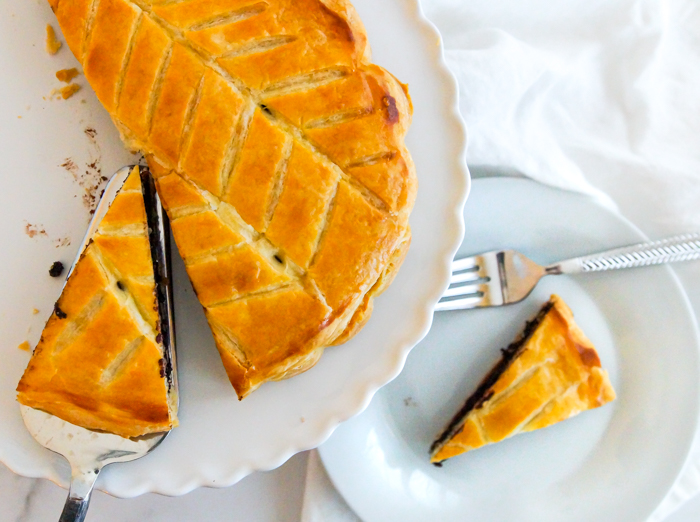 We've made a traditional French King Cake for Epiphany, but did you know that Galette des Rois is also served on Mardi Gras, or Fat Tuesday? 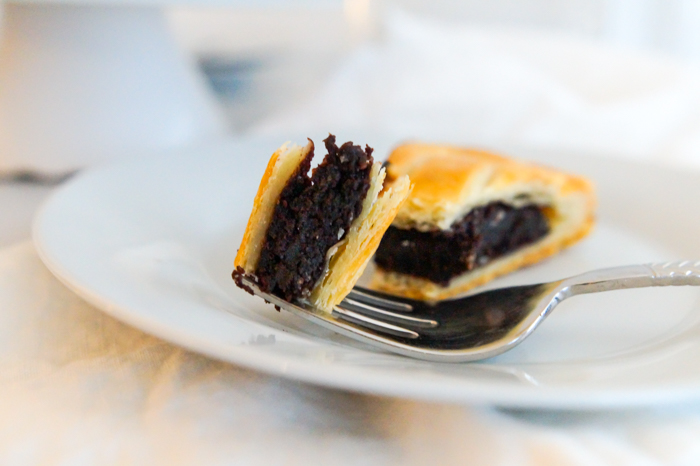 Because Mardi Gras is a time for an over-the-top celebration, I decided to make a chocolate version of the classic French King Cake. Y'all. It was a good idea!

You might be thinking this looks a little different than the King Cake you're used to. You're right. Until a few years ago, I'd only seen a New Orleans-Style King Cake.

A French King Cake, or Galette des Rois, is traditionally made with a puff pastry shell filled with almond cream. A New Orleans, or Louisiana, King Cake is more like a giant cinnamon roll cake, often filled with cream cheese and always topped with icing and purple, yellow, and green sparkling sugar. 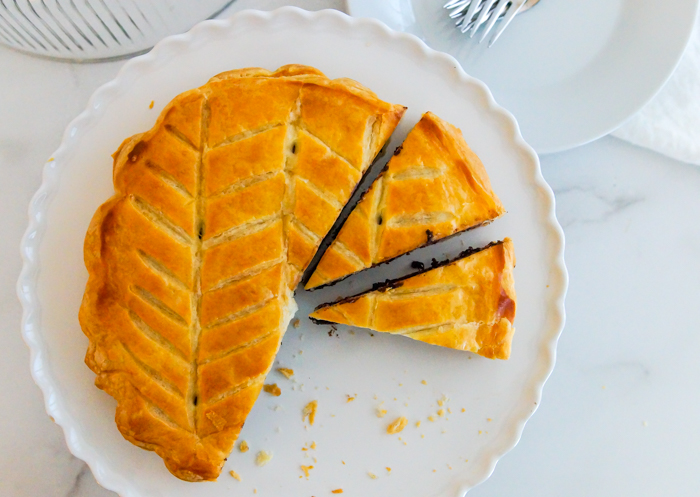 Traditionally, a tiny plastic baby Jesus or a dried bean is baked inside. Whoever finds the baby in their piece gets to be king or queen for the day. I skip that part since I like to take big bites and am afraid of choking. (Although, the finder usually gets to wear a gold paper crown, and I do like that idea.)

Are they both delicious? Yes. 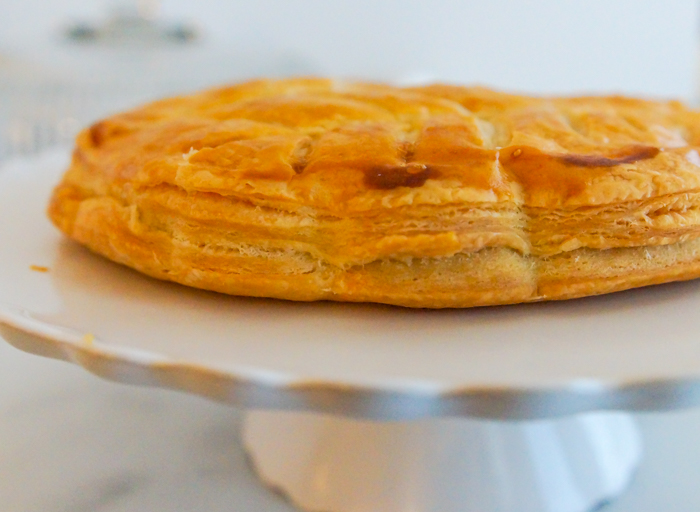 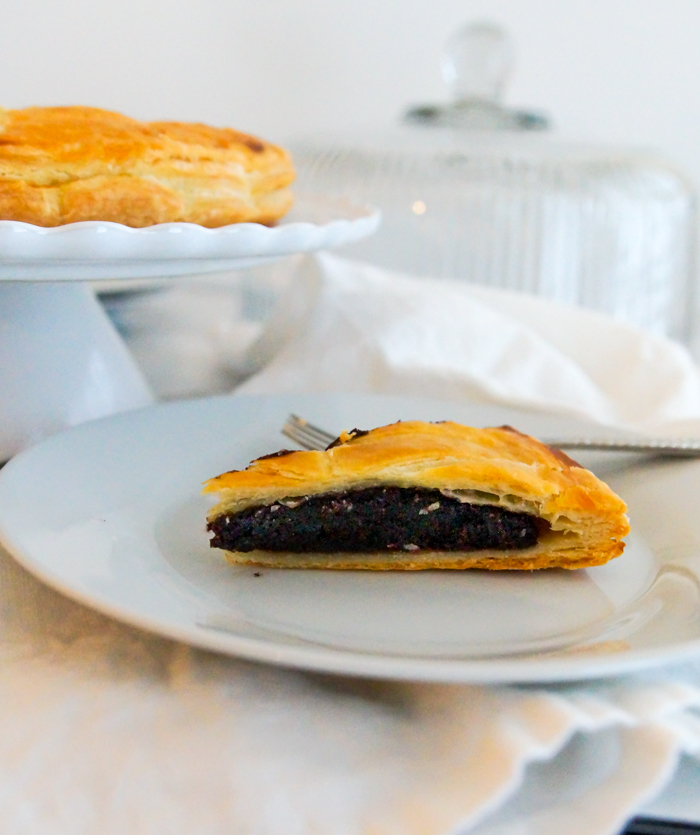 How to Make a Chocolate French King Cake 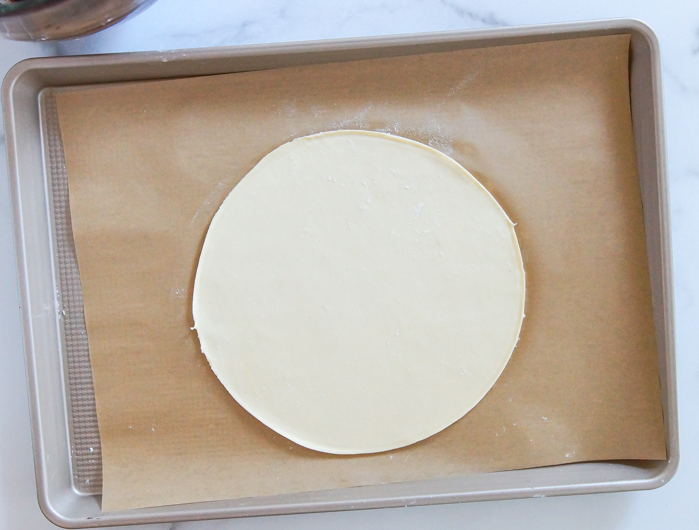 Start with a rough puff pastry. It's easier than you think to make, and you'll really feel like a rock star. Roll it out and trim it to a neat circle. 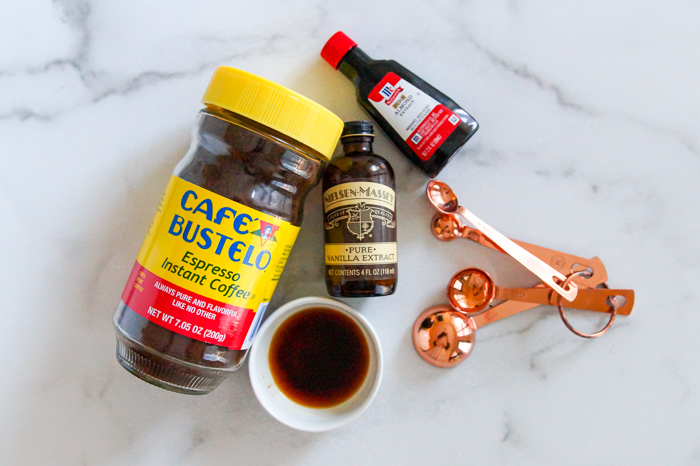 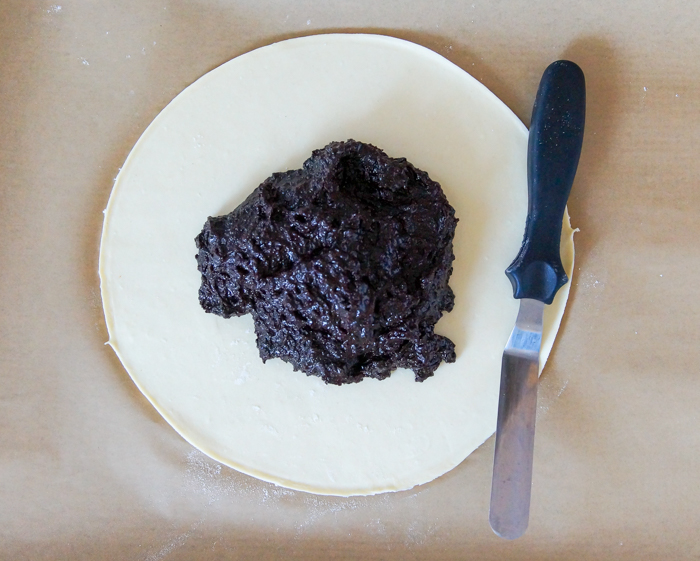 Spread on the chocolate almond filling. It's thick, so you'll need to take care not to stretch the dough as you spread. 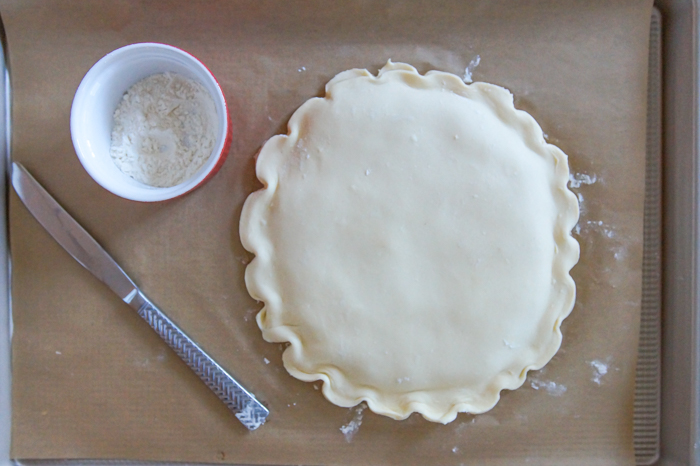 Next, top with another circle of dough and crimp the edges. I like to use the handle end of a table knife to make big scalloped edges. Isn't it cute?

How to score the top of a Galette des Rois 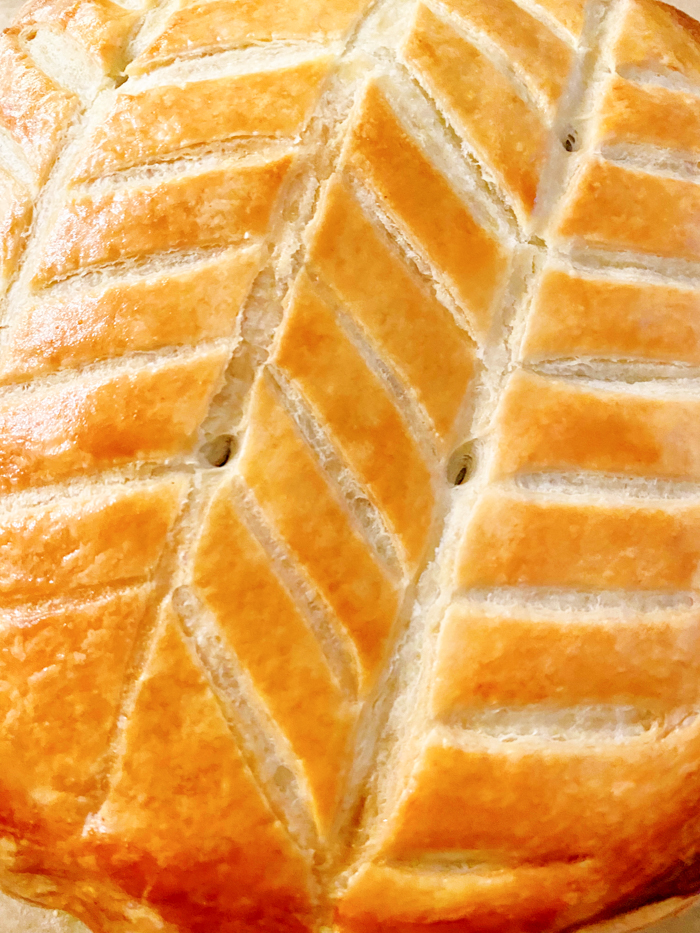 The top of the pastry shell can be kept simple with just a few vent holes for baking, or it can be scored in a decorative pattern. 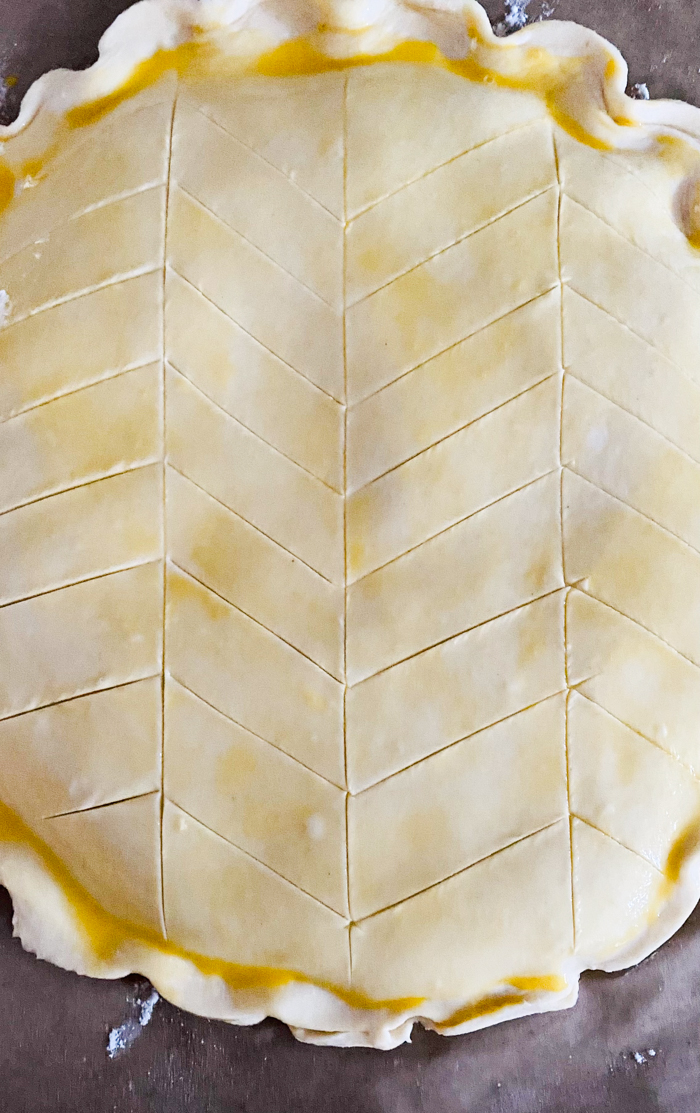 For this Chocolat Galette des Rois, I made a herringbone pattern. Before baking, use a sharp paring knife to make a pattern in the dough without cutting all the way through. You'll also need to add a few vent holes as well. 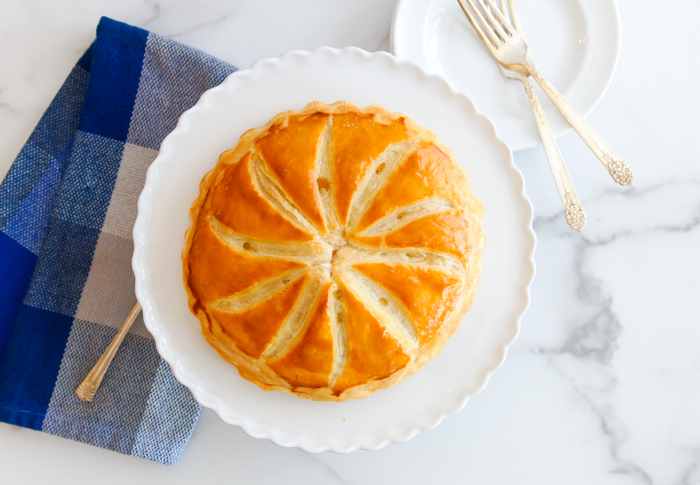 Here's a swirl pattern that is a little simpler than the herringbone.

For a more defined pattern once baked, brush on the egg wash before scoring the dough. The exposed dough will then be free of the wash and have more of a contrast.

Bake it up! Let cool before slicing and serving.

Beat the almond paste, cocoa, and powdered sugar together until combined. In a small bowl, stir the vanilla and almond extracts with the espresso powder until dissolved. Beat in the extract/espresso and egg until incorporated. Set aside.

Line a cookie sheet with parchment. Divide rough puff into two equal parts. (Remember, you're using only 1/2 of this recipe.) Roll one-half of the dough a little larger than a 9" circle. Use a cake pan as a guide to trim with a paring knife. Place on the prepared pan.

Spread chocolate filling on top, spreading evenly, leaving a 3/4" or so border. The mixture will be thick, so spread carefully not to stretch the dough. Brush edge with water.

Roll the other half of the rough puff into another 9" circle. Press the edge with your fingers to seal. Dip the end of a table knife into flour and press into the sides of the sealed cake to crimp. Refrigerate for 30 minutes.

Preheat oven to 425. Whisk egg yolk and water together. Remove the galette from the refrigerator and brush the top with the egg wash, taking care to avoid the edges and sides. Use the tip of a paring knife to score a decorative pattern on top. Make 6 small vents within the design.

Place in the oven and immediately reduce the heat to 400. Bake for 35-40 minutes, or until golden brown. If browning too quickly, tent with foil.

Remove from panggangan and cool completely before serving. 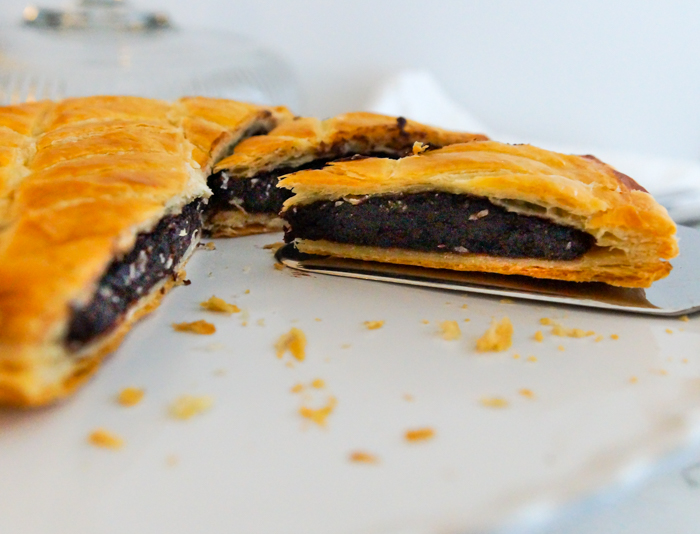 Serve with plenty of ooh-la-las and paper crowns for the guests.